A Hyphen or a Dash? 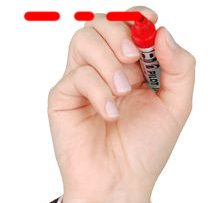 The Differences between Hyphens and Dashes in the English Language

At first glance, hyphens and dashes may seem like they serve the same purpose to the English learner. It makes sense because they look the same, however, they serve different purposes. Understanding the differences between the two will help you become more proficient in your English writing. Let’s look at each individually.

In the English language, you will use hyphens to connect two words together, creating a compound word in the process. A compound word is essentially two words that are treated as though they are one word. This is a difficult concept to wrap your head around, but using them can make the meaning attached to you sentence clearer to your reader.

The good thing is that the rules surrounding compound words aren’t too strict, so you can usually get away with not using them. Still, let’s look at an example of how you may use one in a sentence:

“She explored the well-maintained ­building.”

This sentence tells you that the building the lady explored was in good repair. You’ll also notice that the hyphen isn’t necessarily needed to convey the meaning in the sentence.

There are other uses for hyphens. For example, people with double-barrelled (note the use of the hyphen) names will use hyphens to connect those names. Examples include the following:

You will also use hyphens to write compound numbers if you write a number as a word, rather than using digits. This only applies to numbers between 21 and 99, with the exception of numbers that you can divide by ten. For example:

Finally, you can use a hyphen to talk about a range of values. Let’s look at an example:

I think he’ll score 2-4 goals in the game

Here, the hyphen basically replaces the word to, but serves the same purpose.

One Last Note on Hyphens

You do not need to add spaces on either side of a hyphen. They connect directly to the word, as though they are letters themselves. This is important to note when writing a hyphen in a word processor. Adding spaces will turn the hyphen into a dash. Speaking of which…

You will use dashes as punctuation in a sentence, rather than to join two words or numbers together.

The most common use is similar to that of a colon. You can use a dash to replace simple phrases, such as “it is” or “which was”. Let’s look at another example:

He only felt one thing in that moment – joy.

You could write that sentence as “He only felt one thing in that moment, which was joy.” Notice how the dash keeps the sentence simple and to the point.

Furthermore, you can use dashes to replace commas. This is usually done in less formal writing. We’ll finish with one more example:

She looked at the car, which was blue, before opening the door.

Could be written as:

She looked at the car – which was blue – before opening the door.

Multiple dashes can indicate a missing portion of a word as in this example:

We hope that gives you a better idea of the differences between hyphens and dashes. This is a complex subject, so don’t be afraid to ask for help if you get stuck. Over time, you will develop a greater understanding of the subject.